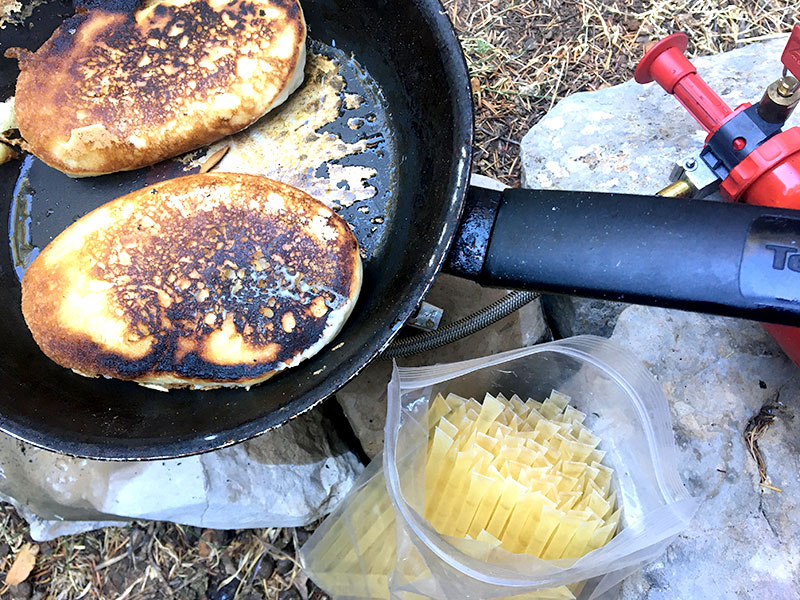 I know for some parts of the US the thought of Fall is a distant memory buried in ever-increasing snow drifts.

A few weeks back I had a chance to sneak in some Fall camping with the kids, and by unanimous kid consent our honey sticks are coming with us on every future camping trip!

In the past, I tried to bottle up some of our gallon raw honey into a little portable plastic squeeze bear. That worked fairly well.

But I don’t know about you, no matter how good the camping gear is, anytime I try to hike out with liquid items for cooking, it always seeps out of the little containers somehow. About the only thing I can hike around without leaking out is water in a sealed Nalgene bottle or camp stove fuel.

It’s not a good start to the day when you’ve got honey all over your hands. When that happens while camping in about two seconds you’ve also got pine needles and dirt that somehow jump onto the sticky honey parts of your hands too. Murphy’s law of camping.

I also found that the raw honey in the squeeze honey bears got hard during the colder nights, and kind of oozed out like toothpaste. It did not spread too well on breakfast pancakes, and you’d end up with large swaths of unsweetened areas, not good in the eye’s of the kids!

So this time around the kids convinced me to pack out a bunch of our clover honey sticks. These things worked so well! No leaking on the hike, even when the kids decided to sit on my pack (don’t they always?).

No arguing about “it’s not fair because so and so got more honey on their pancakes.” Each kid got their allotment of honey sticks and could spread it at will (although I caught some of them just drinking the honey straight and eating their pancakes plain – their choice I guess!).

No problems with the honey thickening overnight either, probably because they’re in thin plastic honey straws and got re-warmed much easier than the thicker mass of honey in a honey bear bottle could.

My only concern was going to be disposing of the plastic straws. This was easily solved with a ziploc bag for garbage and repeated admonitions to the kids to clean the camp site to leave it better than we found it.

Switching to the honey sticks made for a much better cooking experience for camp breakfasts. It was memorable enough the kids still ask me now that we’re at home if they can have honey sticks on pancakes here too!

I know that camping season is gone for most of us. But if you’re planning a family expedition next spring, I would really encourage you to add some of our honey sticks to your food pack, you won’t regret it. They go great on pancakes or anything else needing some sweetness. The risk of a mess is low, and clean up is easy. I guarantee you your kids will thank you for it too! HAPPY JULY 4TH! Enjoy Some Extra Honey With 10% Off. Spring 10% Off Deal + Orange Blossom Out Of Stock!